Partying at its ultimate, tens of thousands of people dancing, fueled by alcohol and god knows what else, on a beach in the middle of the Thai Gulf, participating in one of the biggest parties in the world. The full moon party on Koh Phangang, that’s exactly where my mates and I

were headed. Koh Samui was our half way house for a night before catching the ferry over to Koh Pangang to drink copious amounts of alcohol from buckets, yes alcohol is served by the liter in buckets; just to be certain you’re not sober.

Koh Samui is a beautiful Island, we stayed further north of the so called “hotel strip” in a littler hotel. The beds were horrific, I could feel the springs jousting my rib cage every time I rolled over, just thinking of the bed gives me nightmares as I spent majority of the next morning stretching out my back into shape again (cheap hotels, cheap mattresses). On the contrary our ferry departed right out the front of our accommodation where the beaches are beautifully luxurious, certainly a more relaxing holiday destination then Phuket or Bangkok.

Three days leading up to the full moon party, differently themed parties are held each night, I highly recommend you get there for these, I found them just as fun if not better than the actual full moon party. We gathered a group of party goers from our hotel (Phangan Beach Resort; book early) and set out to head into the jungle for one of these parties. Arriving in the bush we discovered a new world with illuminated tattoo paintings, illuminated art, glow sticks, bars, stages, people drinking and dancing to the music in the middle of the sticks, now this was a party! You must be certain to take sufficient funds for taxi fares as only the locals know how to get to and from these parties. 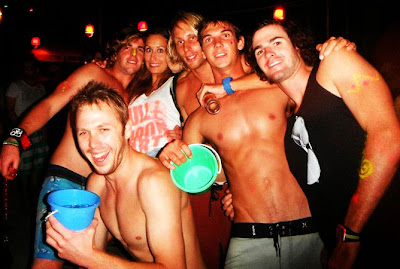 Already in party mode but not expecting much (it was constantly raining, being rain season) because the beach had probably been washed away, we headed down to Hadd Rin (beach holding the full moon party) for the big event. Arriving there we followed the music, through the crowd which became denser the closer to the sand we got. Once we reached the beach, there was no sand to be seen at all, the whole stretch was littered with people partying and dancing to the various DJ’s across the beach. From that instant the vibe hit us and it was on, party mode had switched to a all time high. Buckets were sold in any shop, with deals of buy 4 get one free, no wonder everyone was stupidly wasted. Along the beach was not just music but activities, from water slides to fire twirling, fire limbo and even skip rope. What’s so special about skip rope . . ? Not a lot just a bit alarming when the ropes on FIRE! Have you ever seen drunken people try to skip rope together? Imagine watching them do it whilst the ropes on fire! It’s stupidity at its best, but hey when you drunk you feel like superman right, that is until you get burnt, in which case some people would run into the sea (to cool off) and try again. 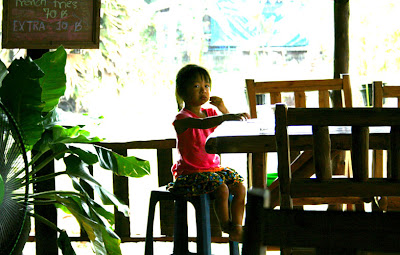 With everyone partied out, I along with the other occupants of the island fled to the dock, leaving the place deserted until the next full moon party. Hung over ferry rides are not pretty, It was as though a murder was committed in the hull and the reactions from the witnesses were impulsive spewing and very dull sad faces. Just when they thought they were scrapping the bottom of the barrel and throwing there spew bags in the trash, they had the bus ride into town to follow.

The teams spirits were at all time lows, until I arrived back to the group with 2 rooms from a hotel literally around the corner. That nights rest was crucial to us as we knew what was to come the next day . . . Bangkok!