The cab ride was torturous, as my headache thumped, with dehydration the cause. Finally arriving to the bus station, and arguing with the cabbie about the fare, we brought our tickets (we, as in the two ladies I shared the cab with from the hostel) and strolled back outside. “F*#k that”  I said, “I refuse to

wait in gridlock traffic again”, frustrated with the journey there through the heavily trafficked Cairo City, as the cab ride wasn’t short of an hour and a half (just to the bus station). So onwards I walked dodging cars, mopeds, pushcarts, fruit and veg stands, children and rubbish piles heaped together, but scattered through the streets, as the two ladies’s tried to keep up. Upon our walk we were lucky enough to catch a glimpse of the spectacular sunset over the Nile whilst making it back to our hostel within 45 minutes, yes 45 minutes, certainly quicker to walk. And that’s how I battled the heavily trafficked Cairo to gain my bus ticket out of there and back to Dahab. Arriving to Cairo however was a lot simpler.

Waking up mid morning on the sleeper train from Luxor we cruised  past many scummy looking ghettos before arriving at the Cairo station. We  then transferred into a cab in search of the “Dahab Hostel”. The hostel was referred to us as the location is very convenient (also cheap), being within walking distance to the Museum, Tahrir Square and the famous Nile. Getting our history fix at the Museum was the first thing we did. Although a lot of history and artifacts were stolen by the British many years ago (in the British Museum in London), the Museum is still rich in history and Tutankhamen’s tomb is definitely worth the visit. Remember your student cards if you have one, as in Egypt tickets to attractions are cheaper for students (tip-you can’t bring your camera into the museum). And although Tahrir Square is home to protesting which mainly occurred during 2011 (against former president Hosni Mubarak), Tahrir Square these days is safe and a really cool place to go and see (right nearthe museum).
For our last day we organized a taxi/guide (from Dahab Hostel) who took us to three different pyramid sites, Saqqara (holds the oldest pyramid of 7,500 years old), Dahshur and of course the most famous Pyramids of Giza. Costing us 250 EGP each whilst he drove around for over half a day informing us about Egypt, It’s history and the Pyramids, some artifacts are still being discovered to this day. Once we arrived to the Giza site, before we even saw the pyramids we were asked to choose between a camel or horse to view them as we were told we can’t walk the whole site as its too big (7miles long in total they told us). My brother and I were not fond of riding camels or horses for that matter and decided to walk. Don’t let them fool you into doing something you’re not comfortable with. I was ecstatic we walked actually, as I could take my time, get different views and pictures that a lot of people don’t. Be prepared to be hassled though, as Egypt’s tourism has dwindled exceptionally (since the 2011 Revolution) and a lot of people are suffering from it. 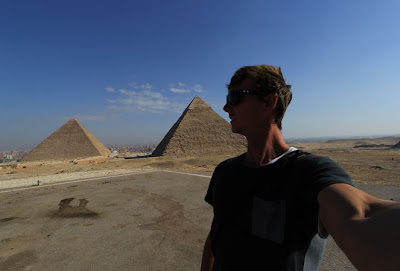 So from beeping horns to Arabic music by the Nile and mosque prayers, Cairo is an extremely busy and historic city with a lot happening. It can be overwhelming at times but a great city to visit. I alonewould go there again just for the pyramids, they are truly impressive that these ancient structures still stand, and tradesmen of today, even with our technology, build buildings lasting only a thousandth as long. So certainly a must see, another one to tick off the bucket list 🙂