”Hey you go Taba?” a Egyptian man questioned me, whilst I was sat at the bus station in Dahab, Egypt “Yea?” I replied. “Mesh (okay in Arabic), you come with me to minibus for 30 pound (EGP) to Taba, much quicker than bus and same price” he spieled. “Haha, ahhh well I was told the bus was 11 pound” I cheekily replied. He grinned and said
“you go ask bus man how much and if it cheaper than 30, I give you minibus for 25”. Nothing has a set price in Egypt, nor do they run on time; inshala is what they so often say, which is Arabic for let god decide. “Yalla Bina(lets go)” where my next words to the guy with the minibus, as it turns out the bus was 30 and wasn’t on time, and so the trip to Petra was underway.

I am all about budget traveling as it extends my length of time away from home and I set out to Petra in true budget fashion. The journey consisted of a bus to the Israel Border (30 EGP), cross into Israel (2 EGP exit Tax from Egypt), taxi through the bottom of Israel to the Aqaba border (40 Israeli Shekels), crossing into Jordan (105 shekel exit tax from Israel) and then up to Petra from Aqaba (50 Jordanian Dina for taxi or 11 JD to Bus station in taxi and 5 JD to Petra from Aqaba).

“Petra Gate Hotel stinks” my cab driver told me as he persistently tried selling me various hotel rooms, of which he would receive commission from. After declining all the man’s “local price” deals, he dropped me at the Petra Gate Hotel (15 JD per night for a single room), as I paid him, he used the sly comment of “don’t tell anybody else it stinks, just our little secret okay” as he winked looking into my eyes to re-assure he wouldn’t get caught trash talking another man’s business. Petra, just a small and humble town has everything within walking distance except for the 5 star hotels, which are further up on the hill. Petra Gate Hotel was only a 15 min walk to the entrance to Petra and around the corner from the Hotel is a restaurant called “Cleopatra Restaurant” with an all you can eat buffet of Jordanian for 4 JD.

As the title states, cave men do still exist. However they are not called cave men, they are Bedouin’s, meaning people of the desert in Arabic and they protect the UNESCO world heritage site of Petra. The Bedouin’s living in these red sandstone caves are very friendly and welcoming. I had the pleasure of sitting with one man in his shop at the highest peak in Petra (1080m above sea level, where he lived), he offered me tea as I sat with him for 2 hours just talking, not once did he ask me to buy anything. 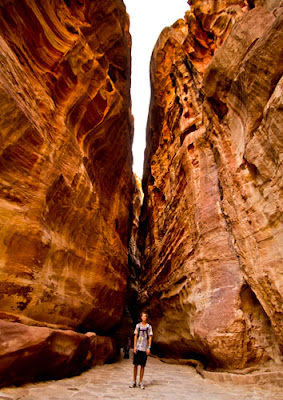 Petra(meaning rock in greek) the rose red city half as old as time, carved into the beautifully coloured sandstone cliffs by the Nabataean’s could date back as far as 312 BC. The incredible facades are 30m wide by 43m high, carved from the red rock-face belittling everything around it. Petra consists of obelisks, temples, sacrificial altars and colonnaded streets. The Al-Khazneh (treasury) and the Ad-Deir Monastery are the two most famous sites. Petra being so magnificent and unique is the greatest tourist attraction I have visited in the world and should be on everybody’s bucket list. I could take as many photos as I liked, but they will never do this truly wonderful city justice, it literally left me awe-struck.

Has anybody else discovered an amazingly great place to visit in the world? I am constantly updating my bucket list. What’s on yours and why?

Tips for Petra; Possibly done in one day if you’re quick but you should take two days there to see it all properly and more if you decide to venture off the beaten track to discover Petra in its entirety. It’s not cheap with a 1 day ticket at 50 JD, 2-day at 55 JD or a 3-day at 60 JD. To save money you could buy a 3-day ticket and if you don’t use all the days, sell it to someone at the gate, that way you get a little bit of your money back and that person gets a cheaper ticket, win, win situation. Have comfortable shoes, water, snacks/lunch, a full camera battery, be prepared to hike and walk. Little Petra is great to check out for sunsets and look into Petra by night (the Treasury beautifully light up by candles) for the correct days it’s on.