An early morning start was needed to make it on time before the bulls got released and started charging towards people in the street in Pamplona, Spain for the “running of the bulls” festival. Each person would cling to the street building walls for dear life as though they were standing upon a 77th floor window sill, as these wilder beasts sprinted down the cobble stone roads, skidding around without traction with their horns merely shaving past peoples limbs. You would be a dead man if you got caught. In an actual fact there is one corner along the street/course so dangerous it’s called “dead-mans corner”. Just goes to show that if you are running with the bulls you need balls and bloody big ones at that, as it’s a brave and death defying decision.

Did I do it . . . NO, hell no. I left home on this trip with every intention to go ahead with it, how could I go all this way and wimp out like a little school girl. It was only until the previous day (the opening ceremony) we found ourselves (my mates and I) asking the locals if they run and each of them turned around to me and said “No Way Man, that Loco (crazy)” in Spanglish , and would I reply with, “yea it is pretty nuts but why don’t you give it a go?” They all had their different reasons, although they all seemed to share the same reason, which is if your caught you’re pretty much dead or end up a vegetable afterwards, some of the locals even train for this event (and no I didn’t ask for details on how they train). Or on the contrary they could have just been pulling my leg. 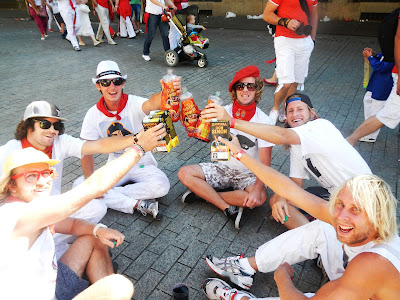 So as much as it is thrilling and a huge adrenalin rush to do (and I do love adrenalin rushes), I value my life quite a lot, not to mention the trip I had planned for the remaining of the year and further. Now call it what you want, us just being big girls or making an educated decision, either way we headed to the bull arena to watch the macho men square up to the bulls. Watching in astonishment the bulls hurled themselves full throttle down the streets towards the arena leaping into the stadium with the most fearless (or stupid) of men holding their position in what seemed to be a game of chicken in which the bull would win every time. At the very last second the men would dive onto the dusty floor allowing the bulls to jump over them upon entry into the arena. Where soon after they would rise to their feet and make an effort to “take the bull by its horns” as did the rest of the runners who flocked into the arena.
With that entertainment for the day we decided to party on and planned to head into town the next day to watch the matadors dance with the bulls, which weighed 4 times as much as them.
Lining up for what seemed like forever we eventually got in, but as the result of the extensive wait we had drunk most of our booze which kept us upbeat and in fiesta mode. So we entered the stadium with limited Sangria, but ended up leaving with full stomachs and still half drunk due to the generosity of the Spaniards. Everyone in the arena made a conscious effort to share all their food with not just us but the surrounding crowd; it was somewhat of a tradition. We felt bad and refused to accept this in the beginning as we had nothing ourselves to offer them, but we couldn’t be rude and consequently got fed like kings.
Watching the exceedingly skilled matadors fight with the bulls was remarkable.  As each bull became tired and run down the matador has the task of “finishing” the bull by stabbing it through the top of the neck with 4 ornamented but poison ended swords. As the bull would struggle to stand the matador quickly put an end to it distress by using a singular long sword to penetrate all the way through its back killing it instantly. It can be quite gory to watch at times although it is a tradition. It was absolutely a fun and entertaining festival worth participating in.
Where and what interesting festivals have you visited in the world?