At 3.15am we (the tourist group and I) squashed ourselves into another poorly Chinese manufactured minivan. We drove through the foot hills of South Sinai under the beautifully star lit sky from Dahab to Sharm El Sheihk (South Sinai, Egypt). Arriving in Sharm, straight onto the boat it was for us and we pulled away from the harbor as our boat briefing begun. The boat gracefully sliced through the stillness of the mornings mirror like water whilst
we began to set up our dive equipment post briefing. Still dark we took to the top deck for a majestic sun rise whilst eating breakfast. Our daily plan was for three dives, the first two we explored the SS Thistlegorm (a famous wreck dive), outside as one dive and inside the wreck for the second. Our final dive was at the stunning Ras Muhammad on two reefs named Shark and Yolanda.

The SS Thistlegorm was a WWII British armed merchant navy ship constructed in 1940 and had made 3 previous trips before sinking in 1941 on its final trip to Alexandria, Egypt. Due to the German and Italian air force and naval activity in the Mediterranean, the ship travelled via South Africa and up to into the Red Sea towards the Suez Canal.Not being able to make it through the Suez Canal, (a collision blocked the canal) she moored at safe anchorage and was later attacked by a fleet of German bombers, killing 9 whilst 30 survived.

Once kitted up we dived into the water to be confronted by this enormously overwhelming pile of metal littered with marine life, resting upon the sea floor. Our dive lasted about 40 mins in which we came across army tanks, bombs, ammunition, two massive anti-war craft guns on the stern in which below them was the huge propeller that once powered the vessel, I even spotted a docile camouflaged crocodile fish which I was able to pat. Grinning from ear to ear as I exited the water, I found myself speechless and awe-struck by the beauty of the wreck along with outstanding visibility here in the Red Sea.
After a one hour break it was time to penetrate the wreck and explore what the vessel was stocked with. During this dive of about 40 mins again, we squeezed in and around the different luggage holds of the ship. Inside we discovered what would have been delivered such as motorbikes, trucks, rifles and many more supplies. Also visiting the captains hold, kitchen and bathroom which as we gradually made our way from the hull to the deck of the ship.
Completely overjoyed with both dives everybody got dry and feasted on the buffet lunch the crew cooked up as the captain set path for Ras Mohammed. After the Ras Mohammed dive briefing we got suited and booted for one last dive at Shark and Yolanda Reef. Diving right off the boat the drop is 400m with a coral wall right in front of you called Shark Reef teaming with sea life. During this dive of about 45mins I was incredibly amazed as I not only witnessed the spectacularly colored corals and fish from bright blue, purple, yellow and orange. But I came across a well camouflaged and mature scorpion fish, a giant moray eel hanging out under a table coral, a blue spotted ray just resting on the sandy bottom and also a hungry turtle snapping away at the corals. Before we exited the water we were lucky enough for a guide to take us through a short coral cave which completely topped my day off.
Being the first out of the water I could see everyone’s faces as they appeared from the sea and onto the boat. They each, had a huge grin as everybody on the boat was overjoyed and speechless, which told me that Ras Muhammad was certainly the best dive they had ever done. People who had dived throughout the world with over 1000’s of dives still claimed this to be the best dive they have done. How could I top this, I am certainly going to be back here for more. 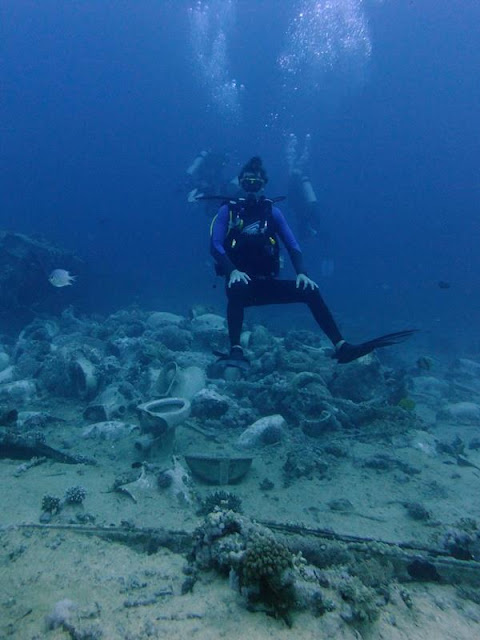 Thinking the excitement was over for the day, we spotted a group of Beluga whales casually waving their tail fins to say hello as we carefully putted past on our way back to harbour. I could not be anymore happier than at that moment right there, the day was one I wouldn’t ever forget.
If you wish to participate in something similar and dive the Red Sea, the company I always dive through (the owner is a great friend of mine) is Under Pressure Divers in Dahab, Egypt, with the most friendly and professional staff, always offering competitively low prices, and affordable dive packages.
Where in the world have you been diving that left you speechless?
Previous Blog – Petra, Jordan      Next Blog – Coloured and White Canyons
If you liked this post you may be interested in getting free e-mail updates
or follow me through RSS and social media