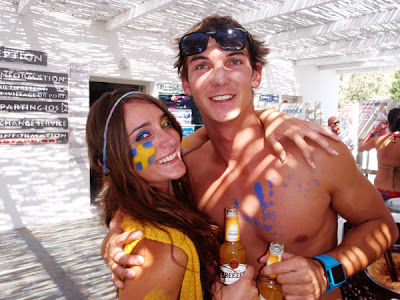 Oh how I just love planes, NOT! During our flight from Bangkok to Athens there was a little confusion on board; well at least I was confused. Never before had I seen something like this on a flight. I watched a lady just casually walk down the aisle in the cabin whilst
holding a dog under her arm as though this was accepted. I suspiciously pointed her out to my friend Camo in disbelief, asking, “hey you can’t have dogs on flights can you, what is she doing?” Not long after, I see the same lady exit the toilet with her dog, and commented to Camo “Oi she just took her dog to the toilet, the dog did a shit . . . in the toilet”Camo laughed whilst replying simultaneously “How do you know?” As I see her arrive to her seat she pulls out a nappy, which caused me to laugh uncontrollably whilst blurting out my answer “she has nappies, she has nappies man, she has bloody dog nappies!”  Am I totally out of the loop here, or is this standard? Are dogs actually allowed in the cabin on board flights? Who else has witnessed anything like this on an international flight?
Anyway arriving to Athens airport safely, we proceeded through customs and over to the baggage claim. Two hours passed, the airport was empty and my friends and I were left scratching our heads. Only 2 of the 4 bags that we checked in Bangkok came out of the baggage claim. Luckily enough the airline co-operated and sent the bags (once arrived to Athens airport) to IOS in the Greek Islands where we were to spend 14 days. Aeroflot; always an interesting time when traveling with this airline.
A long and retched 14 hours later we left the airport by bus to Piraeus (the port). Why so long? Well it wasn’t until morning when the buses ran and the ferry left for the Greek Islands. Had we not been budget travelers we could have booked a more expensive flight to arrive in the morning, but this is a part of making your money last on extensive trips, going for the cheap flights. For fellow travelers, take note that there are no airports on IOS so ferry to and from is the only transport.
The very clean and well maintained IOS Resort, where we stayed on the Island of IOS, is the best deal in town, for location (close to the nightlife and restaurants) and price. Run by a very friendly Greek family and Big Mike the manager will certainly look after you. Down by the main beach at Mylopotas are great places to stay, being right by the sand, but after a night out, trekking over and down the hill can be torturous especially between 3am-8am being drunk, tired or hangover.
IOS  is similar to Santorini but without so much people, it’s a huge party destination for youths/students. There are lots of cool little night clubs, pubs and restaurants (some converted from old stables, with beautiful arch ways inside, really cool) scattered across the busy hill of buildings, which between them are very thin narrow walkways (very photogenic during the day).
The standard day in IOS consists of waking up at about 12pm and heading to the beach to nurse your hangover whilst sharing stories of the previous night’s escapades. At about 3pm everybody siestas (naps in the afternoon), then heads out to dinner about 7-9pm, where drinking begins to get switched into party mode. The clubs don’t get busy until after 1-2am depending on the nights and everybody parties until 4-8am everyday! well morning really. If you’re looking for great nightlife, good looking women/guys, a beach scattered with eye candy and water sports, beautiful sunset and sunrise views and delicious Greek food (my favourites and two must try places are Piperri Tapas and Meze Dishes and Porky’s), IOS your Island.
Swedish midsummer happens once a year in IOS and is the party you have been waiting for. The Swedish midsummer to Swede’s is what spring break (Can-Cun) is to the Americans. Another fluke among many for us boys on this trip landed us here for the party of a lifetime Once you awake the party has started with people dressed in blue, yellow and body paint of the same colours (representing the Swedish flag). Usually the house parties littered with youths start from 8-10am, then to the main square for straw-peedo’s (where a straw is put inside the bottle of an alcoholic beverage, replacing the air once you scull you’re drink as fast as possible, usually competing against another party goer), dancing and socializing. Once the shops in the square get drunk dry, everybody follows one another and starts the hilariously funny walk over to the Mylopotas beach to party on. Being there for most of the afternoon, not many people make it past this point but if you do the party continues on into the clubs, where usually some shots are 1 euro each (quite lethal if you are still standing). If u decided to get to IOS (which you should!), be sure to look up what day this celebration is on and get there for it. During our time there we four boys (my mates I was travelling with) along with a group of girls we became friends with, hired ATV’s to cruise around the island. We covered basically the entire Island (a very scenic ride) and over to a beautiful remote beach called Manganari (a bus sometimes runs to this beach as another option). I highly recommend the ATV’s though as the views are amazingly stunning, especially riding back as the sun sets. Although, be wary of where you hire your ATV’s as ours frustratingly broke down a few times.

Living on IOS is certainly a crazy lifestyle, but a great place to visit. 14 days was a long time and with only having 3 days off from drinking our bodies had certainly been looking forward to a break. Being in London there was not much chance for that, if I was allowed through customs after what had happened – UK customs
Where have you been in the world and stumbled upon an amazing party?
to find out more about IOS click here