My very first day in India and I decided to stay in the Holy City of Varanasi. I truly wanted to witness their culture, see the famous Gange River and what it’s all about. I thought I was prepared to see it all but after my unforgettably hectic 32 hour transit from Nepal, being starved and exhausted, nothing could prepare me for what I witnessed on my way to the guest house

Ready to finally crash out being not far from the guest house, I dragged myself along with my bags through the narrow alleyways congested with food vendors, chai tea vendors, cows and their poo patties infested with flies scattered over the ground. All of a sudden I was swiftly pushed aside by a group of men who chanted “Rama nama satya hai”. Following them were four men who carried a stretcher with the body of a women right by my face as I clung to the wall behind me in shock. Never before had I seen a dead body and it was showcased centimeters from my face ever so vivid. Even though it was wrapped in cloth I saw the exact outline of her body from her feet, to her lifeless belly all the way up to her head. I looked at Minwo (a South Korean guy I shared the tuk-tuk with) and swallowed hard in disbelief  not saying a single word, the remaining few steps to our guest house neither of us spoke, letting what happened really sink in.Which really just haunted our memory banks for all eternity.

Arriving in India I definitely felt a culture shock. I thought I would be ready for it living in Egypt for 5 months and spending over a week in Nepal, but I was just too overwhelmed by it all. I began to question why I was even visiting India in the first place. Can I even handle this place? Is it to spiritual for me? I am not really into that sort of spirituality to start with. Why am I even here? ”I don’t think I even get this place” I told myself. Maybe I will have to bring my flight home forward? Never before had I felt like this in any country I’ve visited. First things first I desired sleep, after which I could attempt to wrap my head around it all. 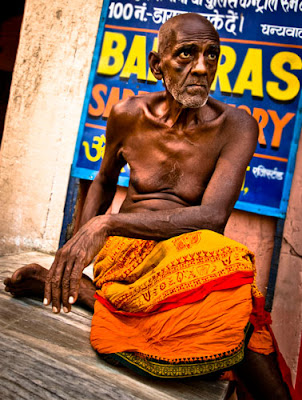 Waking up revitalized I cruised around the city and learnt more about it which helped me to understand the place and grow to like it a little more. I learnt that each day about 140-180 bodies get brought through the alleyways to the river, where I watched them drop the bodies in the famous Gange River and then cremate each one in an open fire by the river bed for everyone to see, letting the ashes drift into the river. The chant the men would spiel of “Rama nama satya hai”, in English is, “the name of god is truth”, meaning the body in which they carry no longer breaths or has truth.
Myself and a few people I met at the guest house took a sunset boat ride on the famous Holy River, where we learnt more about it than expected. We paddled up the calm,  flat river whilst our captain informed us that there are 5 types of people who are not to be cremated. Pregnant women, children under 10, lepers, people bitten by a cobra, or people who commit suicide. Those who are not cremated are taken to the middle of the river and sunk with a weighted stone, but often eventually float back up to the surface. Just as our captain informed us of this ritual, I glanced past his shoulder to the surface of the river noticing a body laying face down in the water. The corpse floated right by us only 3 meters from our boat causing us all to feel very unpleasant and nauseas. To break the silence, I anxiously asked “what happens to the bodies that surface?. Not particularly after an answer our captain replied anyway with “every morning, a man comes down early to river and collects bodies, he is called ‘the cleaner’ ”. Feeling even more nauseas, I hadn’t the nerve to further the conversation.
As you could imagine the Gange River is extremely filthy from not just the bodies but because on average 2.9 billion litres of human excrement discharges into it daily. This river is one of the most polluted rivers in the world and what fascinates me the most is the locals bathe, wash their clothes and even drink from this water every day.
In the end, as filthy and characterized as Varanasi is, I am glad I visited. It has really opened my eyes to realize how extremely different people live in all different parts of the world and why their life is the way it is. I did end up having a great time in Varanasi, and I would recommend it to those who are looking to really see something incredibly cultural and different, but be warned you will see some outlandish behavior.
Culture shocks can happen everywhere in the world, I sometimes even get them as I return home. Where in the world have you witnessed a culture shock?