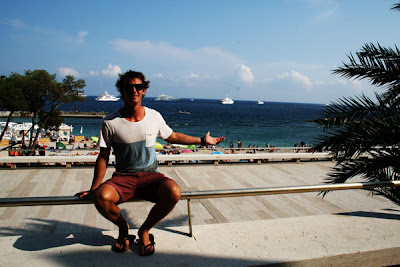 En route from surfing the west coast of France to Italy for some sightseeing, we stopped by in Monaco to check out what it’s all about. I had never heard of or even knew this city existed although I was assured by my good friend Cameron it would be well worth a visit to witness the glamour life of expensive cars, bikes, boats, hotels, restaurants and overpriced boutiques.
I tentatively drove down the thin windy hair pinned coastal roads to get to the main part of town. As we came to underground tunnels along the cliff faces it was a challenge in itself to comprehend where to drive, let alone driving in our mini bus (LDV Mini Van) amongst the heavily trafficked area, and I was surprised we actually made it through.
Arriving at the promenade we cut a few laps when we lost faith in finding a park. However, just as we decided to leave we luckily spotted a car pulling out, at which I was ecstatic, meaning I could get my ass off the hot seat and away from the wheel.
Heading to the beach for a quick swim we soon began to notice this town really is a rich man’s playground. There were super

expensive luxury cars driving about, humongous motor yachts that were just ridiculously gigantic. Some too big to even fit in the harbour, even though they were simply only carrying the basics. You know jet skis, spare boats (not those little dinghies but boats!) and helicopters.

Walking up by the harbour that holds well over a billion dollars worth of boats we eventually discovered a restaurant that was best suited to our budget. We thought it would be best to treat ourselves to dinner out for once. That and cooking out of the van in Monaco would probably be a slight bit unacceptable and may prompt the police to usher our tight asses out of this high rollers paradise.
After dinner we casually walked about, constantly amazed at the money that must roll into this place. With our jaws already hitting the pavement we were stunned to come across the Monte Carlo

Casino/Hotel. Holy Hell, this place was dead set like a scene from a James Bond movie. Even a BMW or Mercedes would look like a bomb here among the Rolls Royce’s, Bentley’s, Lamborghini’s, Porsche’s and Ferrari’s.

We continued on with our stroll through the streets glancing at all the fancy shops and restaurants via our way back towards the house (our LDV Van). Some places really caught our eye, like when we came to a complete stop as we noticed the extravagantly high priced  meals on one of the menus displayed by the entrance of a fancy restaurant. The meals started at a staggering 50 Euro for entrées to 300 Euro for standard meals and more.
It wasn’t until we brought our eyes up off the menu whilst peering in through the window to preview some of their guests meals that we realised the guests were utterly shocked! And I mean appalled, and their expressions were directed at the four of us (4 mates roadtripping Europe). Cameron and I looked around to see what they were so disgusted in. We hadn’t poo’ed our pants and were properly dressed for a change (wearing T-shirts).
Eventually our eyes met after both witnessing our mate Joel whom was still intrigued at the menu but happened to subconsciously be scratching his, well, you know. We couldn’t help but break out in fits of laughter at the cliché expense of the poor guests trying to enjoy their 300 Euro+ meal in the famously expensive town of Monaco whilst a non-showered, un-shaven Aussie surfer lent by the restaurant window scratching his junk. Sorry Mr And Mrs Richy Rich but that was too good!
Have you been to Monaco? What were your thoughts?